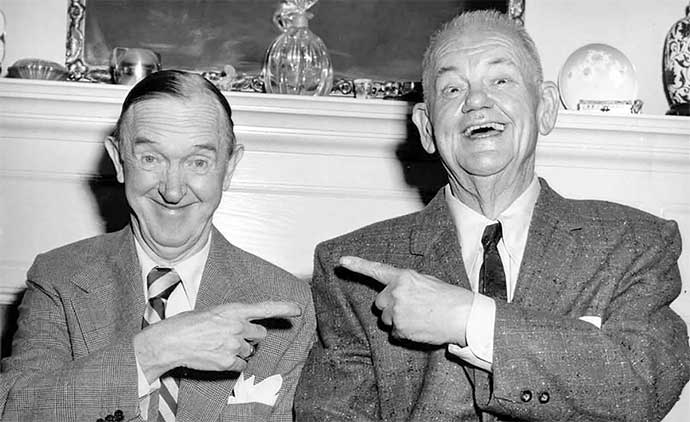 The last appearance of Laurel and Hardy in a movie dates back to 1956 and was shot in Stan Laurel’s home. As the greatest will remember, Laurel and Hardy, (in English Laurel & Hardy), were one of the most famous comic duo in the history of cinema, interpreter of the slapstick genre, composed by Stan Laurel (born Arthur Stanley Jefferson, nicknamed Stanlio in Italian and Stan in English), of British origin, and from the American Oliver Hardy (born Oliver Norvell Hardy, nicknamed “Ollio” in Italian, in English Oliver, Ollie or Babe as he is said to have been nicknamed for the first time by his barber):

Even before working as a couple, they were both established actors; Laurel had worked on 50 productions, Hardy on 250. During their career, which lasted from 1921 (with a five-year hiatus until 1926) to 1951, they starred in 107 films. In September 1955 Hardy suffered a heart attack  and later a  stroke . Precisely for this reason, during 1956 he underwent a very strict diet that made him lose more than seventy kilos. A short amateur video of Stan’s family portrays the two old friends at that time: Stan appears serene, despite an arm paralyzed by the disease (again a stroke), while on his left Oliver is a thin character, completely unrelated to the known Ollio, with flaccid pappagorgia and thinning, silvery hair from old age:

Hardy suffered a second stroke in September 1956 which led to semiparalysis . He suffered another in July 1957 , entering a coma from which he never recovered . Ironically, Hardy, shortly before dying, had been seized by a paralysis that held him on one side only. Laurel, however, was paralyzed at the end of her days on the opposite side to that of her great workmate and friend:

Hardy passed away on August 7, 1957 at the age of 65 . Laurel, who had been assisting her companion at the bedside for the past few months, was shocked but did not show up at his friend’s funeral. This news was later used as evidence that the two in real life you were ignorant, but actually Laurel could not go to the funeral because of the ban to leave imposed by the attending physician, and justified his absence with the words: ” Babe would understood “. Hardy is buried at  The Valhalla Memorial Park Cemetery  in Hollywood.

Oliver Hardy was a staunch affiliate of Freemasonry and it was his brothers from the Shrine lodge, ” Arabian order of the nobles of the mystical shrine “, who took care of his funeral. The tombstone on his grave bears this engraving: « Genius of comedy his talent brought joy and laughter to the world. – Mailed for future memory by the Sons of the Desert in 1977 »; it was made to affix by his friends of the association “The children of the desert” who had not forgotten it twenty years after his death. From that moment Laurel decided not to participate in any more films out of respect for her friend. The historical movie showing “Laurel and Hardy” for the last time together: